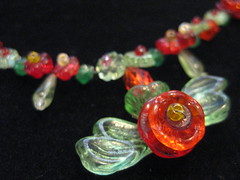 This necklace is made up entirely of 1920s glass bugle beads that were made in Toruń in northern Poland (then Pomerania). There are some unique shapes, and being made of glass, they are very heavy.

Between 1923 and 1939, these beads and millions like them were produced from a very successful workshop on the outskirts of Toruń and sent to fashion houses both locally and in cities like Prague, Vienna and Paris. Then, with the coming of Hitler’s invasion of Poland and the Second World War, the owners of the workshop closed their doors. They took the beads they had in the workshop and buried them in boxes in the ground beneath the floor of the workshop and then fled, hoping to return to reclaim them some day. And so the beads remained buried beneath the flagstones throughout the Second World War when the workshop was razed, and beyond during the re-building of post-war Poland. Although still in possession of the land on which the workshop had stood, the owners and their descendants never returned to Toruń to claim them, and the beads became a thing of legend. Nearly seventy years later, descendants of the original owners returned to Toruń to live, and decided to see if there was any truth to the stories of ‘buried treasure’. Much to their astonishment and delight, what they uncovered beneath the flagstones were thirty great boxes, still well preserved in the earth, of 1920s and 1930s glass bugle beads!

The beads were split up amongst a few relations, including friends of mine who are artists. Knowing how much I love vintage clothing, beads and the 1920s, they made me a gift of three stunning necklaces made from the bugle beads in the ten boxes they inherited. This is the ‘Naszyjnik Różany’ or ‘Rose Necklace’.

The theme for “Looking Close… on Friday” is “beads”, so I thought this necklace of buried treasure was a suitable choice.

According to many experts, erectile dysfunction can be a serious problem, but not always. When an erection problem happens occasionally, it’s not always a major concern. This is because various factors may be causing such a problem. These include drinking alcohol, stress, fatigue, or the side effects of the medication you are taking. Therefore, one […]

The post How to Prepare and Talk to Your Doctor About Erectile Dysfunction  in 2020 appeared first on WebSta.ME. 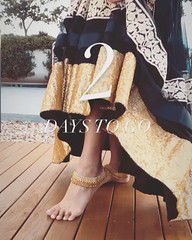 Buy the best artificial fashion jewelry set for bridal online from Payaliaandco.com. We have an expert team that selects each piece to complement our rich Indian culture with a wide range of artificial jewelry for women. To learn more about us, visit our website.

Motorcycle culture has not changed that much since it became a thing decades ago. If one were to imagine an average biker, they would be riding a powerful Harley Davidson chopper you can hear a few blocks away. In addition, they would be wearing a certain kind of outfit typical for bikers, an outfit consisting […]

The post 7 Best Leather Motorcycle Vests for Men in 2020 appeared first on WebSta.ME. 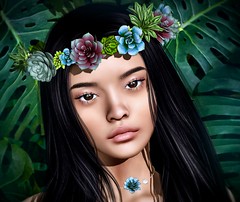 “Aloha is compassion, love, light, harmony, peace and joy, all rolled into one. Aloha is choosing love in every moment, showing up and being lovingly present no matter what it looks like on the inner or outer.”
— Aloha is Compassion, Ken Ballard

Living in the world of advanced technology is amazing because of many reasons. Almost every aspect of people’s lives has changed because of different innovations and pieces of technology. The basic ones are familiar to all of us and they are mostly associated with Internet technology. You can now communicate with people around the world […]

The post 4 Most Common Types of Linear Actuators appeared first on WebSta.ME.

Hosting a doggie birthday is probably one of the most trending, unique and exciting ways of spoiling your pooch. It is quickly gaining popularity among pet owners and also getting quite a lot of mentions on social media. For most pet parents, this is the day to gift your furry friend with its best treats […]