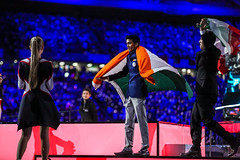 Himba Woman with her child. In Damaraland between Twyfelfontein and Spitzkoppe, by the road side in a small enterprise selling woodcarvings and dolls of Himba dress and customs.

The Himba (singular: OmuHimba, plural: OvaHimba) are indigenous peoples with an estimated population of about 50,000 people living in northern Namibia, in the Kunene Region (formerly Kaokoland) and on the other side of the Kunene River in Angola. There are also a few groups left of the OvaTwa, who are also OvaHimba, but are hunter-gatherers, but OvaHimba do not like to be associated with OvaTwa. The OvaHimba are a semi-nomadic, pastoralist people, culturally distinguishable from the Herero people in northern Namibia and southern Angola, and speak OtjiHimba, a variety of Herero, which belongs to the Bantu family within Niger–Congo. The OvaHimba are considered the last (semi-) nomadic people of Namibia.

Both the Himba men and women are accustomed to wearing traditional clothing that befits their living environment in the Kaokoland and the hot semi-arid climate of their area, in most occurrences this consists simply of skirt-like clothing made from calfskins and sheep skin or increasingly from more modern textiles, and occasionally sandals for footwear. women’s sandals are made from cows’ skin. Himba women especially, as well as Himba men, are remarkably famous for covering themselves with otjize paste, a cosmetic mixture of butterfat and ochre pigment, to cleanse the skin over long periods due to water scarcity and protect themselves from the extremely hot and dry climate of the Kaokoland as well as against mosquito insect bites. The cosmetic mixture, often perfumed with the aromatic resin of the omuzumba shrub, gives their skin and hair plaits a distinctive orange or red-tinge characteristic, as well as texture and style. Otjize is considered foremost a highly desirable aesthetic beauty cosmetic, symbolizing earth’s rich red color and blood the essence of life, and is consistent with the OvaHimba ideal of beauty.

Hairstyle and jewelry play a significant role among the OvaHimba, it indicates age and social status within their community. An infant or child will generally have his head kept shaven of hair or a small crop of hair on his head crown, this soon is sculptured to one braided hair plait extended to the rear of the head for young boys and young girls have two braided hair plaits extended forward towards the face often parallel to their eyes, the form of wear being determined by the oruzo membership (patrilineal descent group), the style remains during preadolescence until reaching puberty. Some young girls, with exception, may also have one braided hair plait extended forwards, which means they are one of a pair of twins.

From pubescence, boys continue to have one braided hair plait, girls will have many otjize textured hair plaits, some arranged to veil the girl’s face, in daily practice the hair plaits are often tied together and held parted back from the face. Women who have been married for about a year, or have had a child, wear an ornate headpiece called the Erembe, sculptured from sheepskin, with many streams of braided hair, coloured and put in shape with otjize paste. Unmarried young men continue to wear one braided hair plait extended to the rear of the head, while married men wear a cap or head-wrap and un-braided hair beneath. Widowed men will remove their cap or head-wrap and expose un-braided hair. The OvaHimba are also accustomed to use wood ash for hair cleansing due to water scarcity.

The OvaHimba are polygamous, with the average Himba man being husband to two wives at the same time. They also practice early arranged marriages. Young Himba girls are married to male partners chosen by their fathers. This happens from the onset of puberty which may mean that girls aged 10 or below are married off. This practice is illegal in Namibia, and even some OvaHimba contest it but it is nevertheless widespread. Among the Himba people, it is customary as a rite of passage to circumcise boys before puberty. Upon marriage, a Himba boy is considered a man, unlike a Himba girl who is not considered a fully-fledged woman until she bears a child. Marriage with the OvaHimba involves transactions between cattle, which is the source of their economy. Bridewealth is involved in these transactions; this can be negotiable between the groom’s family and the bride’s father, depending on the poverty status between the families involved. In order for the bride’s family to accept the bridewealth, the cattle must appear of high quality.

Because of the harsh desert climate in the region where they live and their seclusion from outside influences, the OvaHimba have managed to maintain and preserve much of their traditional lifestyle. Members live under a tribal structure based on bilateral descent that helps them live in one of the most extreme environments on earth.

Under bilateral descent, every tribe member belongs to two clans: one through the father (a patriclan, called oruzo) and another through the mother (a matriclan, called eanda).[9] Himba clans are led by the eldest male in the clan. Sons live with their father’s clan, and when daughters marry, they go to live with the clan of their husband. However, inheritance of wealth does not follow the patriclan but is determined by the matriclan, that is, a son does not inherit his father’s cattle but his maternal uncle’s instead.

Bilateral descent is found among only a few groups in West Africa, India, Australia, Melanesia and Polynesia, and anthropologists consider the system advantageous for groups that live in extreme environments because it allows individuals to rely on two sets of families dispersed over a wide area. 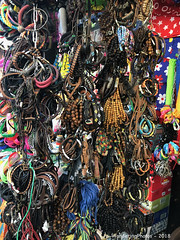